This iconic photo sparked outrage when it appeared on the front page of the Boston Herald American (now the Boston Herald) more than 40 years ago, mobilizing a generation of activists and drawing attention to the profound racial injustice that plagued the nation. Titled “The Soiling of Old Glory,” the photo depicts the brutal attack on a black man by a white man during the Boston busing desegregation protests. The white man lunges at his victim with a flagpole bearing the American flag, literally weaponizing the symbol of a nation that purports to value freedom, democracy, and equal protection.

Decades later, the soil remains. The photo below, taken on Sunday outside the AIPAC Conference in Washington, D.C., shows members of the Jewish Defense League severely beating a 55-year-old Palestinian-American man. The perpetrators surround the man, punching and kicking him while striking him repeatedly with wooden flagpoles on which our flag, once again, appears.

The victim has been identified as Kamal Nafyeh, a father of four and an instructor at Central Piedmont Community College in Charlotte, NC. He was reportedly visiting his daughter, Danya, who is studying at Georgetown University in Washington. Mr. Nayfeh was left with cuts and bruises all over his body, including an injury to his eye that required 18 stitches, according to +972.

Much has been made of the power of images to change minds, particularly when the image amounts to an unflattering portrait of our nation. Like the 1976 photo, the image above would appear to be impossible to ignore. An unprovoked attack on an innocent man, by a mob wielding American flags, based on nothing more than his national origin — it’s unconscionable. Unforgettable. An affront to everything we stand for.

And yet. No major media outlets reported on the attack, not because of a vast conspiracy to keep such an atrocity from the public eye. The attack went unreported because, when it comes to Palestinians, we simply can’t be bothered to care. If we truly believe it is possible for our flag to stand as a symbol of freedom, we cannot pick and choose which vulnerable groups are worthy of our protection. Please share these images, engage in dialogue, and reach out to those who will listen. Our indifference in the face of casual cruelty is its own form of violence. -Post by Margaret Hellerstein 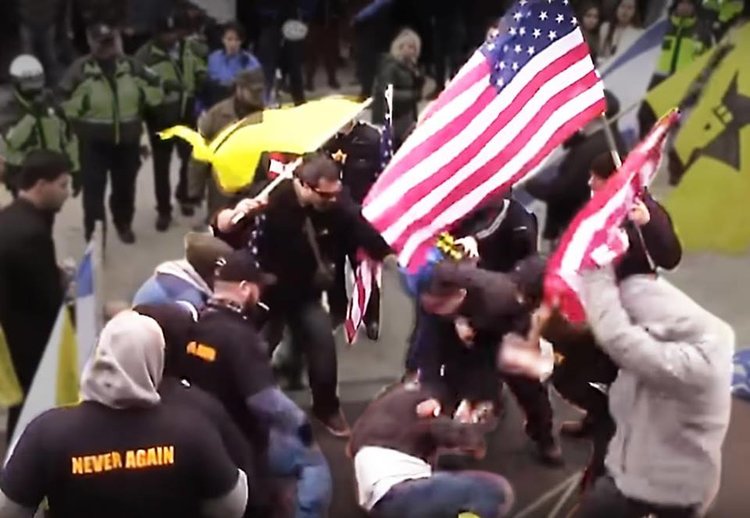