2016 has been another groundbreaking year for the Palestine Advocacy Project. We’ve been working hard to keep our advertisements promoting Palestinian freedom and dignity in public spaces across the United States, despite facing constant censorship and opposition. But we won’t stop there. In 2017, we’re ready to unveil new tactics and new platforms for bringing awareness and understanding to a broad range of communities. We won’t stop until the word “Palestine” is on the tip of every tongue in the country. Here’s a taste of what we’ve been up to!

In March, PalAd activists travelled to New York City, to protest the Friends of the ISraeli Defence Forces annual black-tie gala at the Waldorf Astoria hotel. We took them a gift of helium balloons – red and green in honor of the Palestinian flag – and printed slogans on them such as “IDF – Infringing on Democratic Freedoms” or “IDF – Invasive Destructive Force”. PalAds let the balloons go in the lobby of the hotel, in plain sight of everyone arriving to the event. Afterwards we joined the protests outside with more balloons and our favourite “Friends don’t let Friends Commit War Crimes” banner. 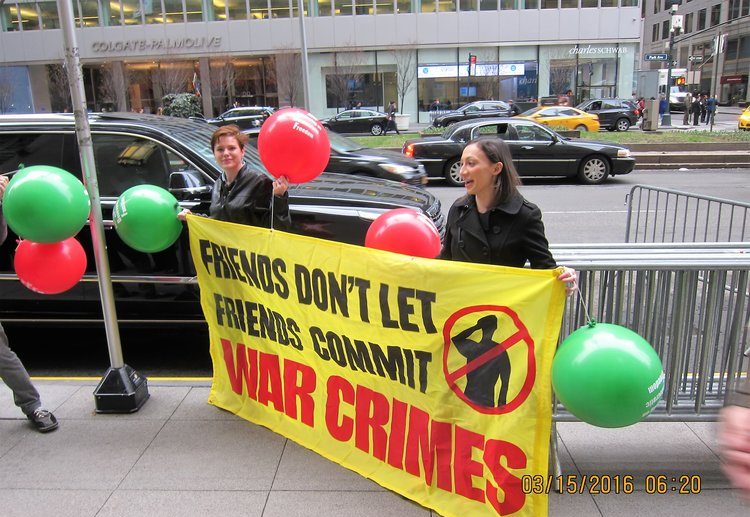 The same month, we also launched a campaign on San Francisco public transit showcasing the work of Mahmoud Darwish, the Poet Laureate of Palestine. While most of our campaigns have focused on raising awareness over the horrors wrought by the Israeli military and West Bank settlers, this one was different. Sections from seven of our favourite Darwish poems went up, with the goal of showing the world a softer side of Palestine. Darwish’s poetry is deeply political, and his sorrow over his people’s statelessness was a constant theme throughout his work. We wanted to show not only the horrors of occupation, but also the emotional landscape it formed. Darwish was the perfect place to go, and we couldn’t have had a more enthusiastic response! 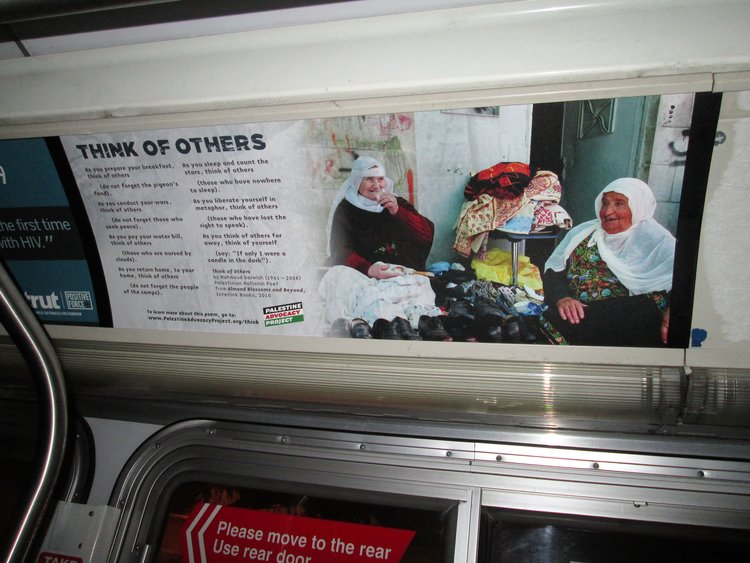 Our other major campaign of the year hit the papers quite recently. In October and November, we launched our “Quotes” ads in nine different circulars at major Universities across the country. In contrast to the poetry campaign, these ads packed a punch. They featured six quotes by Israeli Prime Minister Benjamin Netanyahu, and several of his cabinet members, all of which underscored the racism that runs rampant among Israel’s political elite. We launched our ads shortly after the US Government announced they were increasing military aid to Israel to the sum of $3.8 billion per year – more than any country has ever received. We want the American public to know that money was going to a regime whose Prime Minister called Palestinians “Wild Beasts”, whose Minister of Culture is a self proclaimed Fascist, and whose Minister of Justice was appointed after she openly advocated for genocide in Gaza, to the point of proclaiming that Israel must destroy “the physical homes in which they raised the snakes. Otherwise, more little snakes will be raised there.” As always, we believe that American taxpayers should know where their money is being spent. 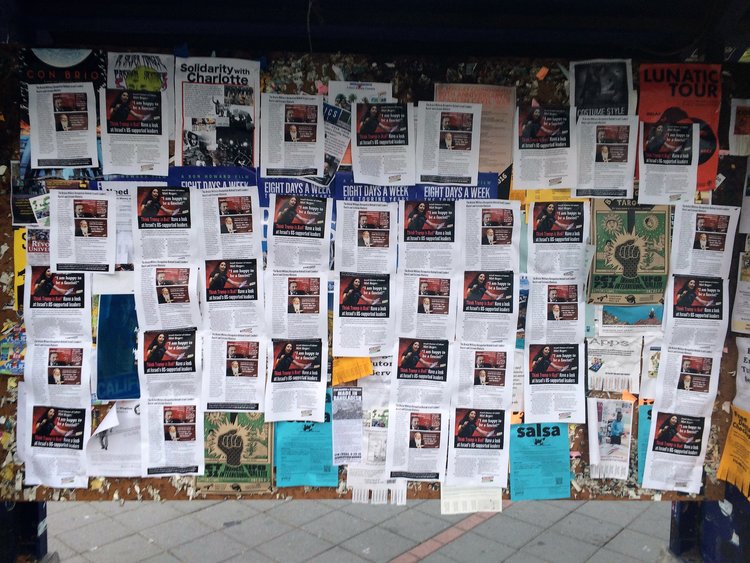 Throughout the year, we’ve also been ongoing in our work to fight political censorship in Boston. Since our ads were banned on public transportation in 2015, we’ve been pushing back against the decision of the Massachusetts Bay Transportation Authority. We’ve always endeavored to have ads that are not only informative, but also meticulously cited, in order to make sure the public knows they’re getting correct information. We believe that honest and factual advertising is a protected form of free speech. We hope to see our ads up again in Boston next year!

2017 is going to be a rough. As we in the US face new organizing challenges in our increasingly fractured political system, Palestinians will be passing a series of painful landmarks. We will see the 100th anniversary of the Balfour Declaration, and the 50th anniversary of the occupation of Gaza and the West Bank, including Jerusalem. Despite the challenges, we are going to be working hard to make sure that these important dates don’t go by unnoticed. Lets make this the last year of the occupation!