BOSTON, MASS. – November 6, 2015: The Massachusetts Bay Transit Authority (MBTA) has changed course and agreed to again display ads from Palestine Advocacy Project after the widely criticized decision to remove them from Boston subway stations. The ads were critical of the Israeli government’s treatment of Palestinians and of U.S. tax dollars being used to support those actions.

The MBTA removed three ads in June 2014, originally claiming they made a mistake in displaying them, as the ads allegedly violated their policy against advertising that “demeans or disparages” individuals or groups. The American Civil Liberties Union (ACLU) of Massachusetts challenged the censorship on behalf of Palestine Advocacy Project (known then as Ads Against Apartheid), asserting that ads critical of government policies did not violate the MBTA’s advertising rules, and were protected by the First Amendment.

The Project chose to re-run one of the removed ads at Davis Station for the month of November. It features the image of a young Palestinian girl along with statistics about the tragic level of violence inflicted by the Israeli government on Palestinian children: “Israel has killed 1 Palestinian child every 4 days since 2000.” A banner at the bottom of the poster reads, “End U.S. Support for Israel.” Several new ads are scheduled for display in December.

Attorneys Howard Cooper and Ben Wish of Todd & Weld, cooperating attorneys for the ACLU of Massachusetts, represented the Palestine Advocacy Project in successfully urging the MBTA to restore the ads.

“The MBTA’s decision to accept Palestine Advocacy Project’s ads for display is a gratifying affirmation that the MBTA remains a public space open to 1st amendment-protected speech,” said Mr. Wish. “Palestine Advocacy Project was looking for nothing more than a space to communicate the constitutionally protected, political speech of its members. It now has that space.”

Sarah Wunsch, Deputy Legal Director of the ACLU of Massachusetts, noted that the organization has successfully pushed the MBTA over many years to allow the display of ads that some consider controversial.

The ad will be displayed in Davis Square Station during the month of November. 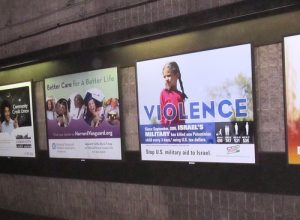 “In a free society, we understand that people may see things in public places with which they disagree. But the government should not be in the business of restricting the free flow of ideas in space that is set up for expression, like advertising space, simply to protect the sensibilities of those who can avert their eyes if they don’t like what they see.”

“We certainly share the discomfort many cities have expressed toward some of the ads pro-Israel organizations have submitted as of late,” said Palestine Advocacy Project President Jake Chase-Lubitz in reference to a recent case against New York’s Metropolitan Transportation Authority, “but we believe that our right to advocate responsibly and compassionately for Palestinian rights is worth protecting. We have an obligation to present the reality in Palestine to Americans and we’re glad that the MBTA has accepted our ads.”