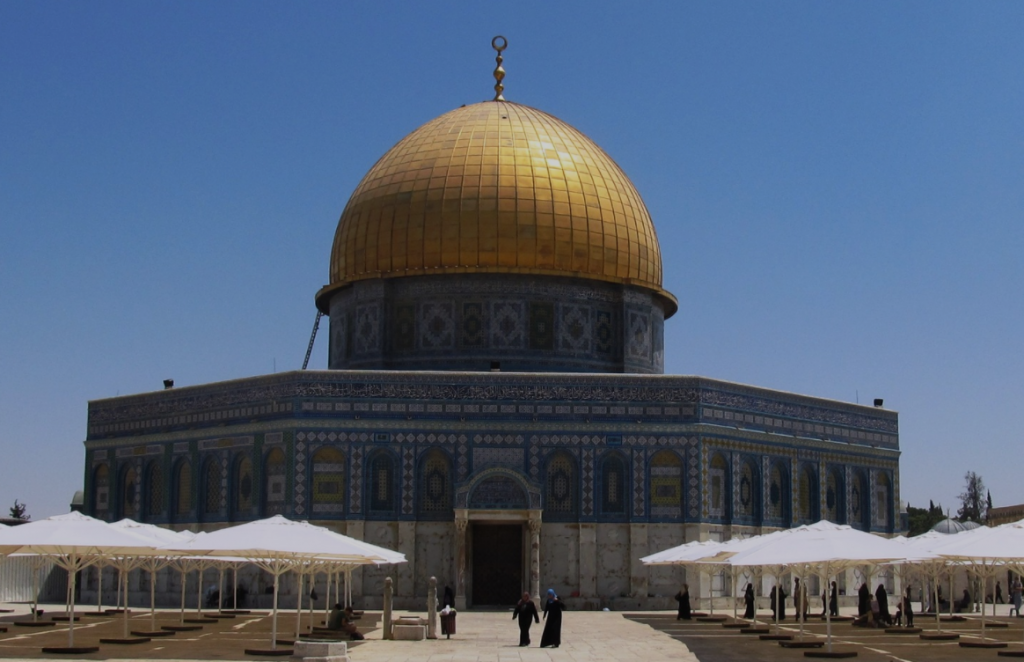 Fifteen years ago today, an Israeli politician named Ariel Sharon strode through the gates of the Haram al-Sharif, the compound housing al-Aqsa Mosque and the Dome of the Rock. Also known as the Temple Mount, the site is holy to both Muslims and Jews. Due to the peace agreements instated when Israel occupied Jerusalem in 1967, the site remained under Jordanian administration – an arrangement that kept in check the competing claims between Palestinian Muslims and Israeli Jews for control. This arrangement allowed for Muslims to feel secure in their continued right to worship at the Mosque, and for Jews to pray at the adjoining Western Wall. When Sharon, heavily guarded, marched in, proclaiming Israel’s right to the site, the Imams of the mosque saw it as a power play, and a threat to their tenuous authority. They called up Muslim Jerusalemites to protest the action, and the Israeli police retaliated with brute force. By the next day, seven Palestinians had been killed and the bloody Second Intifada was under way.

Today, the tensions surrounding the Haram al-Sharif are as palpable as they were fifteen years ago. Most recently, visits to the site by Israeli settlers on Rosh Hashanah sparked the ire of Palestinians, leading to several days of intense protests, which Israeli police met with violent repression. As the clashes mounted, so grew fear among Palestinians. Israeli authorities regularly place severe restrictions on Palestinian’s access to the Mosque. If Israeli influence over the site grows, it could prevent tens or hundreds of thousands of Muslims from worshiping there. Palestinian Authority Executive Committee member Hanan Ashrawi affirmed that Israel would provoke a war with the entire Muslim world if they tried to take over the compound, saying:

“Israel is playing with fire. Clearly, Israel is deliberately creating and escalating a situation of instability, insecurity and violence, thereby incrementally assuring by force its power/security control in preparation for the total annexation and transformation of Al-Haram Al-Sharif….By imposing its own version of its concept of the Temple Mount on the third most holiest Islamic site, Israel is not only provoking the Palestinians, but the entire Muslim world.”

Such a war would mean devastation for Israel, and most likely violent repercussions for the United States, Israel’s greatest ally. With the U.S. currently fighting a war against the so-called Islamic State (ISIS), imperialist threats to one of Islam’s holiest site could mean a massive escalation in fighting and provide a massive push for ISIS recruitment. That is why a decisive response in favor of Muslim worshippers’ continued access to the al-Aqsa mosque, and of Jordanian administration of the compound would bolster much needed support for the U.S. among Arabs and Muslims.

The U.S. Government is not terribly popular in the Middle East. Polls by Pew and Gallup indicate that over the past several years, only 30% of Arab respondents approve of the American actions in the region. This is for many reasons, including western occupations in the 20th century, the devastating Iraq war, ongoing drone warfare, C.I.A. interventions, and, of course, the ongoing military carte blanche to Israel.

A lack of response from U.S. allied Arab governments only exacerbates this disapproval. According to a 2012 study by the Arab Center for Research and Policy Studies, a formidable 84% of Arabs believe that the occupation of Palestine is a Pan-Arab problem, but less than a third of respondents were satisfied by their own government’s response to the crisis. That is unsurprising considering that, while Arab states generously give humanitarian aid to Palestine, almost none will leverage their influence to seek international punitive actions against Israel, such as sanctions, or international criminal charges, even in the aftermath of 2014’s devastating war in Gaza. While different states have condemned Israel’s actions, many fear that mounting a hard opposition would damage their relationships with the United States. Countries such as Saudi Arabia and Egypt who enjoy strong military alliances with the U.S. also enter into collaboration with Israel, despite the solidarity that Saudis or Egyptians on the street feel with Palestinians.

American leaders are aware of the pitfalls of maintaining the status quo in Palestine. In 2012, David Petraus, then the Director of the C.I.A. noted that:

“The conflict foments anti-American sentiment, due to a perception of U.S. favoritism for Israel. Arab anger over the Palestinian question limits the strength and depth of U.S. partnerships with governments and peoples in the AOR [Area of Responsibility] and weakens the legitimacy of moderate regimes in the Arab world. Meanwhile, al-Qaeda and other militant groups exploit that anger to mobilize support.”

In a region where anti-western extremism has become prevalent, Americans are well advised to understand when our policies are geared towards offence and alienation, instead of ‘winning hearts and minds’. Failure to do so in past military engagements has led to the formation and fortification of anti-western militias including, most notoriously, ISIS. The formation of these groups makes the region more dangerous for it’s own citizens, as well as the United States and it’s allies. ISIS, for one, has made their stance on Israel very clear. The terrorist organization has its eye on including all of historic Palestine in a future Islamist State, especially Jerusalem – and al-Aqsa. They have also condemned Hamas as being weak, and faltering in its commitment to Islam, so one can only imagine the brutality which ISIS would use in its ‘liberation’ of Palestine. It is a future to be avoided at all costs. It is also easy to see how Muslims could turn to increasingly more extreme groups if they see them as being able to both end the occupation of Palestine and keep the beloved Haram al-Sharif under Muslim control. The U.S. can preemptively stop this from happening by imposing conditions on Israeli military aid if Israel further challenges the sovereign right of Jordan to control access to the compound. This would both dissaude Israel from continuing its aggression, and boost the U.S.’s regional image as a player that will defend the territory of moderate Muslim countries such as Jordan from Israeli expansion.

While the Netanyahu administration has denied they intend to take over the site, the idea is popular with Israeli right wingers, including several members of Knesset. The Netanyahu administration has also given public money the Temple Institute, an NGO that has publicly advocated for the removal of the Dome of the Rock and al-Aqsa mosque, to make room for the third incarnation of the Jewish temple which stood on the spot almost two thousand years ago. The Temple Institute has suggested, to the outrage of Muslims, that the Muslim Structures be dismantled and relocated. Palestinians and the Islamic world who see the Haram al-Sharif as the last Muslim hold on Jerusalem have every right not to trust Israel with the site.

The Children Are Ready, from the Temple Institute, shows Jerusalem with a Temple in place of the Dome of the Rock.

Imagine then, the consequences of Israel actually taking over the site. If the simple act of Ariel Sharon entering the compound stood as enough of a threat to spark years of protest, violence, and civil disobedience, any further incursions on the sovereignty of the site would most definitely cause an escalation in Palestinian protests. It would also most likely be a rallying point for Islamists like ISIS.

No party has yet proposed a viable solution for the site. Someday, it may be possible to imagine the Haram al-Sharif, the Temple Mount, as a place where adherents of all the Semitic faiths could visit, and perhaps even worship side by side. As long as the occupation of Palestine continues, however, that is not a possibility, as even the slightest change in the status quo could have disastrous consequences. If initiatives by right wing Israelis to take over the compound gain strength, it could incite another Palestinian uprising, or even bring the war with ISIS to Israel and Palestine, made all the more deadly by the presence of powerful Islamist insurgents. If for nothing more than the sake of deescalating a war, the United States and the international community need to remember the lessons of the second Intifada, and tell Israel to keep its hands of the Haram al-Sharif.

Posts by individual contributors do not necessarily reflect the position of Palestine Advocacy Project.