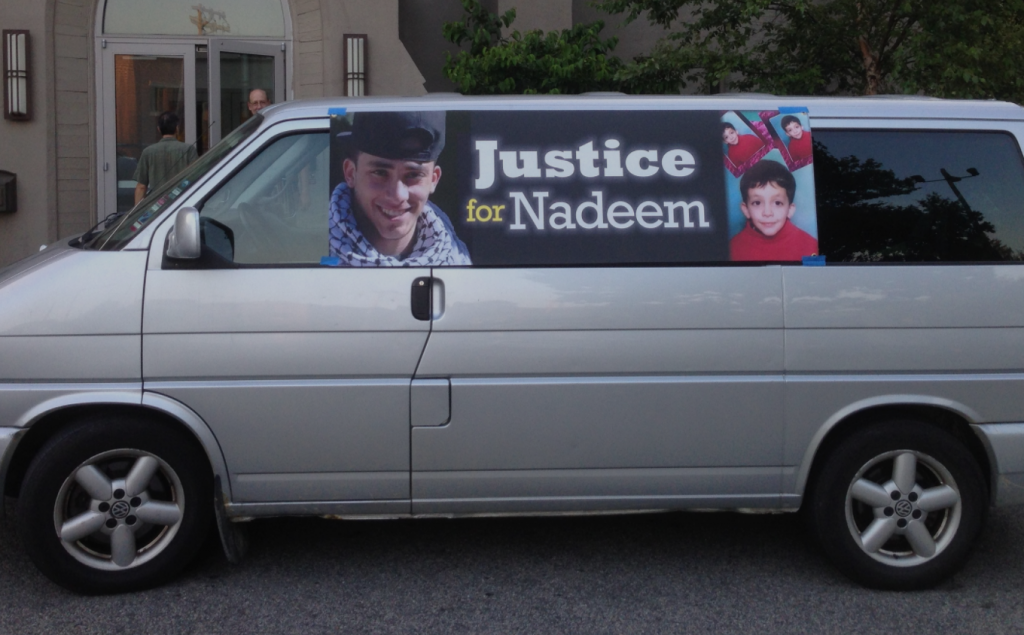 Ever since Nadeem Nuwara, 17, was killed by an Israeli soldier, his father has been seeking justice. Nadeem was shot on May 14th, Nakba Day, while protesting in Beitunia, Palestine. His killer, Ben Dery, was an Israeli border policeman who shot the teenager in violation of Israeli and International Law. The case gained international attention after video footage obtained by CNN and Defense for Children International – Palestine (DCI) showed Dery shooting live ammunition at Nadeem, who was unarmed and unthreatening.

Siam Nuwara, Nadeem’s father, has been working tirelessly to gather the forensic evidence, and build the political support to prosecute Dery. So far, he has successfully convinced the Israeli Government to charge Dery with manslaughter, with a trial set to take place this October. If he Siam wins his case, Dery will be the first Israeli security official to be convicted of manslaughter for killing a Palestinian.

The Palestine Advocacy Project hosted Siam Nuwara to speak last week at the First Baptist Church in Jamaica Plain, Boston. Supporters and member of the Palestinian rights community gathered to hear Siam tell his story. His presentation included the CNN news clip and video footage by DCI and Forensic Architecture. Siam described having Nadeem’s body exhumed for autopsy, against Islamic tradition, to obtain multiple physicians’ statements that Nadeem died from a gunshot wound. This evidence was particularly necessary after Israeli officials denied live ammunition had been fired at Nadeem that day.

Siam’s story ended with a video memorial to his son, which featured not only Siam, but also Nadeem’s mother, sister and brother recalling their favorite memories of Nadeem.

Since arriving in the United States a few months ago, Siam Nuwara has travelled from coast to coast to build awareness about the upcoming trial of Ben Dery and the greater issue of violence against Palestinian Children by the Israeli Military and Police. Before coming to Boston, he spoke to Congressional Representatives and State Department personnel over the issue and attended the one year commemoration of the death of Michael Brown in Ferguson, MO.