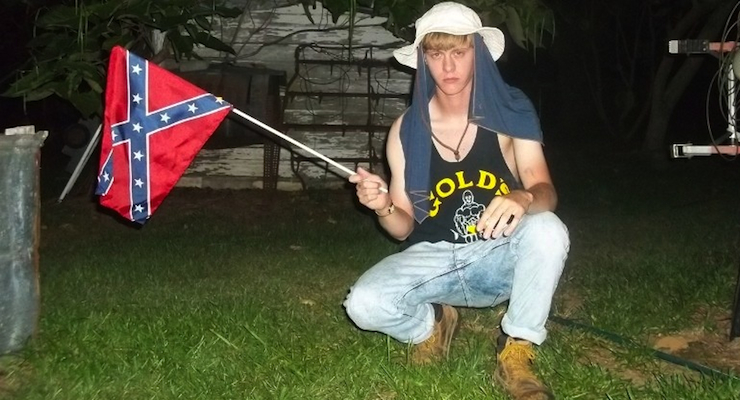 South Carolina is on the brink of taking an incredibly important and much overdue step against apartheid in America. Governor Nikki Haley is calling for the removal of the Confederate flag from the state capitol.

Civil society groups started petitioning against the flag after a white supremacist terrorist killed nine African American churchgoers. The state allowed the Confederate flag to fly at full mast in the days afterwards, while the South Carolina and United States flags flew at a respectful half mast. To many, flying that symbol of an apartheid slave state and of an infamous white supremacist organization (the Ku Klux Klan) is a reminder of both a violent past and unjust present. To see it remain aloft after a racially motivated terrorist attack was insulting. We cannot expect a country to break out of an apartheid mindset when the most powerful symbol of apartheid and white supremacist terrorism in our country is proudly displayed in state capitols.

Dylann Roof, the man responsible for the massacre at Emanuel African Methodist Episcopal church, embraced the apartheid mindset—his Facebook profile picture shows him wearing a jacket with the flags of two Apartheid states: Rhodesia (now Zimbabwe) and Apartheid South Africa (the South African Flag was redesigned for their first racially inclusive general election in 1994). Both regimes bore strong resemblances to the Confederacy and the Jim Crow Era South that followed: political power was concentrated in the hands of the white ruling class; black people were restricted from certain jobs, towns, and public spaces, and were governed under different laws; and white on black violence was by and large considered acceptable and often even encouraged.

Perhaps the most frightening commonality between Rhodesia, Apartheid South Africa, and the Jim Crow South is this: in an apartheid state, a member of a minority group challenges the very nature of the state just by demanding his or her rights. When Roof opened fire, he accused his victims of ‘taking over the country’. The victims, including several ordained reverends and a state senator, were black men and women who had pursued leadership positions and used their influence to advocate for racial justice and equality. To people like Roof, who are so steeped in apartheid that they decorate themselves with the flags of fallen, segregated states, intelligent, empowered black people pose an existential threat.

What does it say then, about a country, in this case the United States, where the flag of an former apartheid slave state still flies on government buildings? Or indeed, a country where public roads, parks, and even schools bear the names of slave owners and Confederate generals? What does it say about a country in which those visual symbols of oppression are hotly defended?

Many in South Carolina have strongly objected to the move to take down the Confederate flag, saying that it is piece of Southern history. In some sense, these people are right, the Confederacy is a part of the South’s history. During its brief Confederate years, over half the population of South Carolina was enslaved, meaning that for the majority of the population, the flag symbolized oppression, not empowerment. The dark history of the flag has continued over the past one and a half centuries as the adopted banner of the Ku Klux Klan.

The influence of our own racist history and ideology spreads far and wide. Just as racist ideology from Rhodesia and South Africa sparked Dylann Roof’s violent rampage in the U.S., our unjust social ideas deeply affect Americans—from state violence, to micro-aggressions. It influences American pop culture, domestic laws, foreign policy, and military action. Ideas that are cultivated in the U.S. spread far beyond our borders, through myriad social, economic, and political routes. That is why it is important to dismantle and discredit the visual symbols of racism. That is why it is important to recognize that this attack was not an isolated incident, or just the actions of one deranged individual. It was a racially motivated terrorist attack that came out of generations of apartheid ideology. Thankfully, there are a lot of people in this country who are able to see this attack as such and to name it publically.

The South Carolina legislature has agreed to bring the issue of the Confederate flag to the floor. Many say they are motivated by the death of their colleague Rev. Clementa Pinckney, the State Senator that Dylann Roof murdered. While it remains unclear whether there will be enough votes for the removal of the flag, the fact that it is up for debate is a clear step forward.

The United States was a country born in apartheid, and allowed it to continue for far too long. Removing the Confederate flag from public spaces is only a small act of atonement for that. It will most likely not prevent future Dylann Roofs from attacking civilians, but it will at least save victims the indignity of knowing that their nation publicly endorses apartheid ideology.

Posts by individual contributors do not necessarily reflect the position of Palestine Advocacy Project.

Previous Post: « I added myself to the Palestine activist blacklist, and you should too.
Next Post: PalAD Team Presents at the U.S. Social Forum »