Today marks the 67th anniversary of the Nakba (“Catastrophe”)—the ethnic cleansing of Palestinians from the land that would become Israel. We mourn for the 13,000 Palestinians that were killed and the 750,000 that were displaced, and we remember the 500 Palestinian towns that were destroyed.(1) Today also marks the first anniversary of the deaths of Nadeem Nuwara and Mohammed Odeh, ages seventeen and fifteen, who were shot and killed while protesting the ongoing oppression of their people.

Across the Segregation Wall, Palestinians in the West Bank congregate for political rallies, parades, and demonstrations. A year ago, the streets of downtown Ramallah were filled wall to wall with spectators waving their flags as they watched the Nakba Day parade. The true commemoration, however, did not come from Palestinian Authority speeches, or the pomp and ceremony of planned celebrations. Rather, it unfolded outside Ramallah on a dusty street barely east of the Green Line, outside the gates of Ofer Prison, home to approximately 1,100 Palestinian prisoners at any given time.

Palestinians are convicted by Israeli military courts at a 99.7% rate, and nearly half of Palestinian men have been incarcerated at some point in their lives.(2) Most are convicted of a range of political crimes, from inciting demonstrations, to throwing rocks, to trespassing on settlement land. Hundreds of current detainees have not even been charged with a crime.(3) Perhaps most tragically, Palestinian children as young as twelve are consistently imprisoned in Ofer, and reports by journalists and human rights groups highlight that some of these children spend weeks at a time in solitary confinement.(4) These conditions are prevalent in sixteen other facilities that house Palestinian prisoners, but Ofer has the distinction of being the only Israeli prison in the West Bank, making it powerful and visible symbol of the Occupation.

The demonstration outside Ofer last Nakba Day was small, mostly men and boys, hoping to march all the way to the gates of the prison, only to be repelled by soldiers shooting teargas and rubber-coated bullets as they approached the parking lot. The demonstrators would push forward, sometimes responding by throwing rocks, until they were pushed back into the town to regroup. It was during this point in the action – the falling back — that two teenage boys were shot and killed.

Two video clips caught the story in action. The first, from a security camera outside a local business, captured footage of the two boys as each one was shot, Nuwara first, and Odeh an hour later. Both were unarmed, neither was even facing towards the prison. A CNN cameraman shot the second video, which caught Israeli border policeman Ben Deri firing the shot that killed Nuwara. Deri did not have orders to shoot live ammunition. 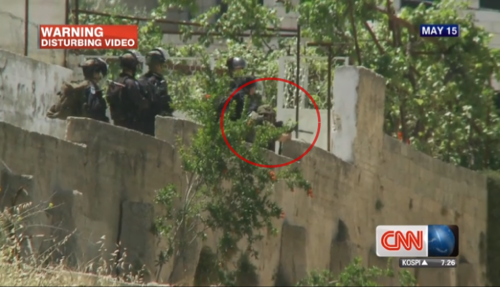 Previous Post: « Advertising Partner Threatened at Gunpoint
Next Post: I added myself to the Palestine activist blacklist, and you should too. »