Palestine Advocacy Project launched a major ad campaign this week, publicizing the Israeli government’s violent policies towards Palestinians. The ads will appear in public transit systems and on billboard trucks in seven cities across the United States throughout the month of March.

The ads in Los Angeles, New York, San Antonio, San Diego, San Francisco, and Washington D.C read: ‘Homeless,’ ‘Stolen,’ and ‘Violence,’ referring to Israel’s systematic demolition of Palestinian homes(1,2), its violence against Palestinian children(3,4,5), and the ongoing construction of Jewish settlements in the West Bank, including East Jerusalem(6). Additional ads in Boston and Washington D.C. highlight Israel’s brutal assault on Gaza last summer, which killed more than 2,000 Palestinians, the majority of them civilians, including more than 500 children according to the United Nations, and displaced more than 400,000 others.(7)

Jake Chase-Lubitz, a board member of the Project, stated, “American tax dollars help the Israeli government maintain a brutal military occupation of Palestinian territory, which has denied Palestinians their basic rights for decades. These ads show what Israel’s occupation and apartheid really look like, and it is important for Americans to see that.”

The ads are being launched in the middle of a controversial visit to D.C. by Israeli Prime Minister Benjamin Netanyahu. President Barack Obama, Vice President Joe Biden, and a number of other Washington leaders have refused to meet Netanyahu, presenting an opportunity for both politicians and the general public to reexamine the faltering relationship between the U.S. and Israel. 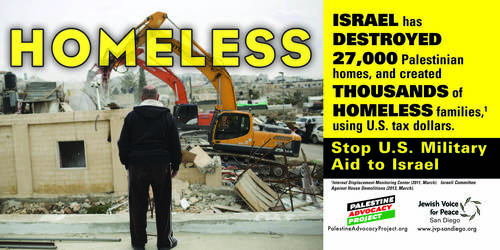 In 2014, Palestine Advocacy Project ran ads in Boston, Chicago, Dallas, and Los Angeles, educating Americans about Israel’s policies. Those campaigns caused a considerable backlash from Israel’s supporters. In Boston, the Massachusetts Bay Transit Authority removed the ads before the end of the contract term. In Los Angeles, billboards were taken down following a series of threats and acts of vandalism. Undeterred, the Project is expanding its efforts in 2015, demonstrating the increased capacity and scope of the Palestinian rights movement.

Palestine Advocacy Project relies on your support. If you want to see more efforts like this, please make a donation today.

Institute for Middle East Understanding
Jewish Voice for Peace – D.C. Metro Chapter
Code Pink
US Campaign to End The Israeli Occupation
Everyone who supported us on Indiegogo